Rebekah Armusik attended King’s College where she majored in literature. Shortly after graduation, she began writing Memoirs of a Gothic Soul. At first, the novel was more of an autobiographical project that centered on her eccentric Slovak family and her experiences in Northeast Pennsylvania, but soon her grandmother’s haunting tales became the focus of the book. Before long, Rebekah’s love of the Gothic novel began to change the direction of the series. Working from the original layout, she began feverishly re-working the tale.

In August 2010, she chose to self-publish Memoirs of a Gothic Soul and quickly established a loyal fan base eager to read more. Her second novel, Mariposa opened to rave reviews on Halloween 2011. In 2012, Rebekah released two novels in one year, Book 3: Lucifer Rising and Book 4: Vlkolak King. Additionally, in 2013, Rebekah released her most acclaimed book in the series to date, In the Shadows.  Her novels have been best sellers in the Gothic romance and supernatural fiction categories on amazon.com.

Since the release of her last novel in the Gothic Memoirs series, Rebekah has been diligently working on her latest project, and has recently finished the first novel in her new supernatural series; Rebekah is currently busy writing the second novel of the series. 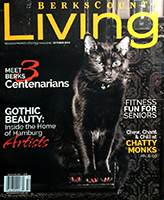 Check out the huge 10 page feature on Rebekah in the October 2015 Berks County Living Magazine. Look who made the cover – her kitty, the handsome Mischa.